Studies of new prototypes of façade elements integrating biodiversity and taking into account successful thermal qualities to reconcile external insulation and the use of living organisms.
June - July 2022

A biodiversity pavilion at BAP!

Studies of new prototypes of façade elements integrating biodiversity and taking into account successful thermal qualities to reconcile external insulation and the use of living organisms.

JUNE-JULY 2022: A Biodiversity Pavilion at BAP!
On the occasion of the Biennial of Architecture and Landscape (BAP) of Versailles, Chartier Dalix continues the research begun with FAIRE and presents a biodiversity pavilion in front of the Château de Versailles.
JUNE 2021
COLONIZING ARCHITECTURE WITH THE LIVING, PARIS 5
Installation of three biodiverse walls

The FAIRE accelerator for innovative projects materializes its support of the research conducted by Chartier Dalix Architectes, the winner of the 2017 call for projects. It is currently backing the construction of three prototypes of ‘biodiverse’ walls, hosted by the Muséum d’Histoire Naturelle, Rue de Buffon, in the 5th arrondissement of Paris, in order to experiment with accommodating the living in dry-stone, brick, or LCC-block construction. These materials are arranged in such a way that an interior void is created in order to accommodate the substrate. This operation is made possible by the presence of lateral chaining elements that hold the two parts of the wall together. The whole forms a complete wall, both structural and functional. In addition to providing a space between the different parts of the masonry wall, openings of varying sizes are created in the exterior façade.

Stone is used without mortar. Like the old dry stone walls on which spontaneous vegetation thrives, the prototype is built using a traditional technique, which involves carefully selecting interlocking stones and adapting their size to the height of the wall. Erected by craftsmen from the French Federation of Dry Stone Professionals (FFPPS), the wall is designed with reused and recycled stones from a materials depot of the City of Paris. Several types of stone are used, including granite and porphyry from reused cobblestones, and limestone from the banks of the Seine. The motley composition of the wall improves its load-bearing structure, while also presenting a diversity of appearance (colors, homogeneity of surfaces, etc.).

Brick is very conducive to accommodating the living due to its physicochemical properties (porosity and pH). It can be used to form a wide variety of shapes with many possible types of bonds. The prototype applies a form of ‘traditional mixed’ bonding revisited in collaboration with the bricklaying company. The mashrabiya that accommodates the plants on the façade is structurally maintained by a layer of load-bearing bricks at the rear of the wall. The headers and stretchers intersect in order to ensure the stability of the system while providing many interconnected voids. The connection between voids is fundamental in the system, whatever the material, as it ensures part of the ecological continuity, water distribution, and mycorrhizal networking. In addition, one of the characteristics of brick is its material versatility, allowing different moldings based on needs. Here, the headers (transverse bricks) are lengthened by the supplier in order to make the various layers—the mashrabiya on the façade, the internal substrate layer, and the load-bearing wall—to hold together more securely.

Lightweight cellular concrete is of value here as a standard structural module, now present in building systems in many places throughout the planet. An inexpensive material, its alveolar structure provides insulating qualities, and its bubbles can also serve as a ‘reservoir’ for the living. Foam concrete is also brittle, which might offer many possibilities to improve accommodation for living organisms, while introducing a rich sculpturality (as in Vincent Mauger’s work). Furthermore, LCC is relatively easy to use and low-tech, paving the way for varied experiments at different scales.

As part of its collaboration with the CEMEX research laboratory, which became involved as a partner in the project, the agency went to Bienne to experiment with different types of concrete by incorporating pockets of substrate and negative space to generate textures and reliefs that could accommodate flora and fauna on the façade.
Once brought back to Paris, the first prototype—called FAIRE—was cut in half in the lab in order to observe how seeds had developed in the network formed by the lumps of soil. This first observation highlighted the fact that when used as a surface layer, porous concrete didn’t allow water to infiltrate the block long enough.

At the initiative of Chartier Dalix Architectes, the prototypes were produced with the backing of Pavillon de l’Arsenal’s innovative project accelerator FAIRE, supported by the Pavillon de l’Arsenal with the support of the City of Paris, Caisse des Dépôts, MINI and EDF. The experiment is being monitored by Delphine Lewandowski, as part of her thesis hosted by Chartier-Dalix and directed by the CESCO (Muséum national d’Histoire naturelle) and the GSA laboratory (at the Paris-Malaquais school of architecture). The research activities compare three different systems: a prototype using LCC blocks (Bio’bric) constructed by Sylvamétal, a brick prototype (Rairies Montrieux) produced by the BYN; and a prototype in reused and recycled stones (from the warehouses of the City of Paris), raised by craftsmen from the FFPPS Federation. The green roof and the substrate inside the wall are supplied by Le Prieuré.

In 2017, Chartier Dalix won the FAIRE call for projects for an investigation into accommodating the living in architecture. A partnership with Philippe Clergeau, from the Muséum d’Histoire Naturelle, Marc Barra from the Regional Agency for Biodiversity, and the private company TOPAGER, lead to their first experiment using concrete. The construction materials company CEMEX offered to create a series of innovative prototypes for the team in its research laboratory in Switzerland. The prototypes were brought to Paris and seeded by TOPAGER.

In 2019, a CIFE thesis was hosted at the firm on the topic of ‘biodiverse’ walls as imagined by Chartier-Dalix. Conducted by Delphine Lewandowski, the thesis was co-supervised by Robert Le Roy from the GSA laboratory of the Paris-Malaquais architecture school and Philippe Clergeau of the CESCO laboratory of the Museum d’Histoire Naturelle de Paris.

The ‘biodiverse’ wall forms a new typology for vertical plant wall systems aiming to enhance urban biodiversity by accommodating local fauna and flora. Rather than having a vertical garden that generally consists of exotic plants, this is an inhabited wall with unique architectural qualities that offers an opportunity for plants to establish a lasting presence, in a more self-sustaining way than the hydroponic approach favored in ‘green walls.’

What makes this system original compared to existing vertical revegetation systems is the continuity of a substrate network inside the wall and the thickness of the wall’s surface layer. The substrate is protected by a surface layer that is approximately ten centimeters thick and pierced with cavities in which the plants can grow. The design of the continuous network of substrate in the wall aims at both ensuring the ecological continuity of a ‘living’ substrate and water retention, thereby allowing plants to develop there indefinitely due to the large spaces provided for root systems.

In 2021, dry-stone, brick, and LCC-block prototypes were installed at 43 Rue Buffon. This installation was supported by Pavillon de l’Arsenal’s FAIRE accelerator for urban projects. 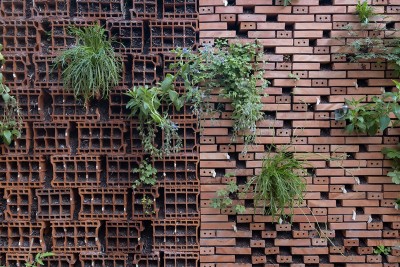 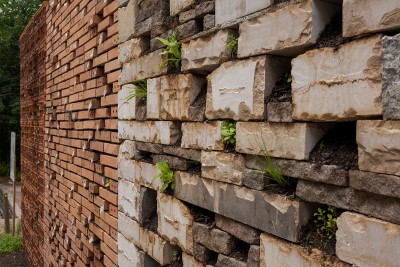 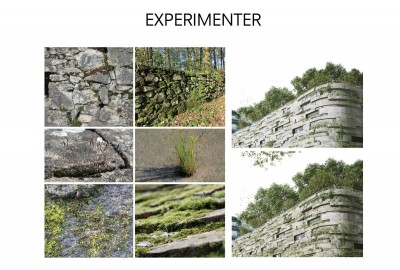 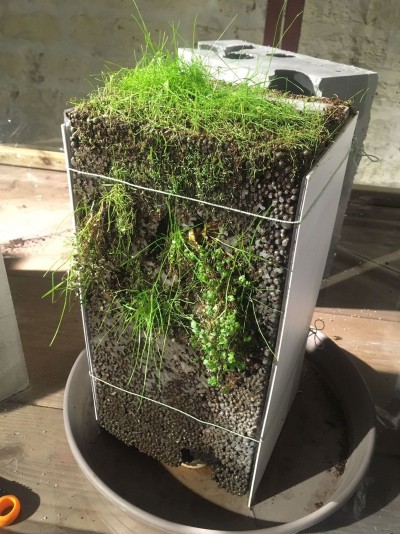 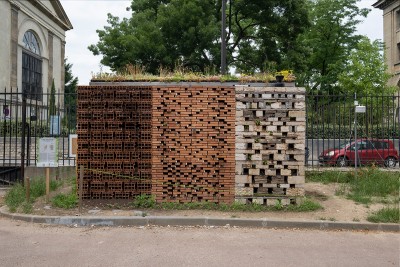 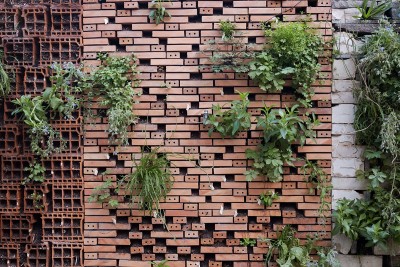 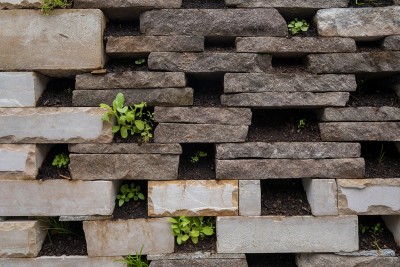 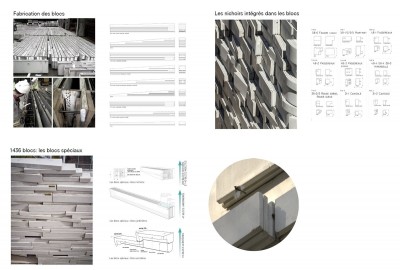 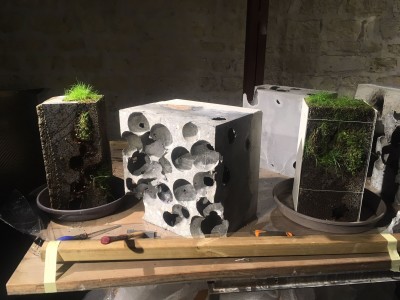 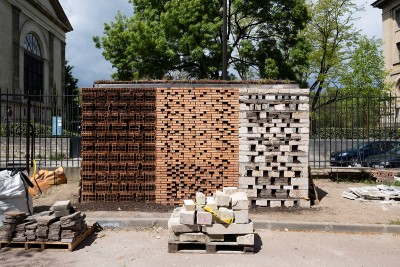 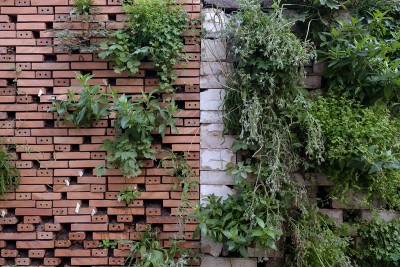 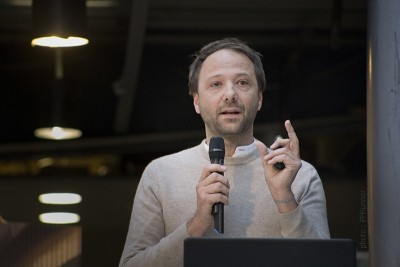 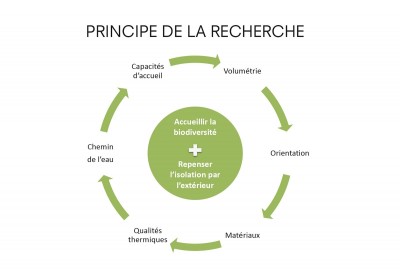 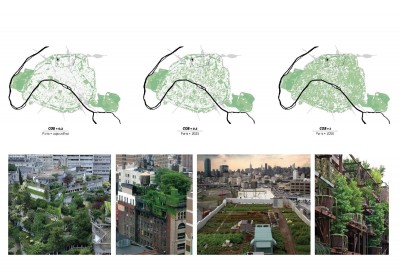