Green Island Regaining control of the Seine as a citizen, collectively and concretely thanks to an independent platform that creates awareness and cleans up canals and ponds in Paris and its surrounding area. Offering up a fun and secure, educational bathing area. Such is the challenge of this team, on the scale of the Grand Paris
May 2019

Ilot vert is a floating platform made from waste from the Parisian canals, a real demonstrator and tool to raise awareness of recycling and clean energy.

Regaining control of the Seine as a citizen, collectively and concretely thanks to an independent platform that creates awareness and cleans up canals and ponds in Paris and its surrounding area. Offering up a fun and secure, educational bathing area. Such is the challenge of this team, on the scale of the Grand Paris

" Taking back the Seine

The level of pollution in the Seine has continuously risen since the 1960s. Yesteryear, swimming in the Seine in Paris was all the rage. Nowadays, people sneak a swim in the Ourcq Canal. This is an urban quality of life problem, of the re-appropriation of the city focused on as a major issue: Parisians taking back the city. An effective demonstration and an awareness-raising tool for recycling and clean energy, the Ilot Vert floats on the water by means of modules composed of plastic bottles recovered from the Seine.

Waste recovery
The aim is to re-appropriate the Seine in a civic-minded, collective and concrete way thanks to an independent platform that sensitizes inhabitants to the cleanup of the canal. The basic units are made of trash regularly scooped up from the Seine; additional modules integrate decontaminating plants, a principle involving solar distillation, water purification, hydraulic and wind energy, etc. By putting the tons of waste collected on display, the goal is to raise awareness, warn about and propose solutions for the energy transition. Thus, ecology is no longer imposed but turned into fun! Users identify, share and live differently in the city. If the form of an island fits the site for which it is intended, its ingenious and gradually increasing structure sets up an ecological showcase promoting a new way of dealing with trash. The idea is to show the extent to which the canal is polluted by its inhabitants and to raise their awareness. The goal is not to punish but rather to sensitize.

The aim is to get them to think about recycling as a source of energy, to reconsider urban swimming as an added value, to invent applications and marine ecosystems of the 21st century that take their environment and inhabitants into account. Today, this is their challenge, on the scale of the Greater Paris region.

ILOT VERT - ECOLOGICAL SHOWCASE PROMOTING A NEW WAY OF DEALING WITH TRASH > The island floats thanks to modules comprised of plastic bottles removed from the Seine.
> It contains water and atmosphere decontaminating plants, systems for generating clean energy (wind and photovoltaic panels) and a system for water treatment (desalination).

The prototype is comprised of 4 aluminum modules of 2m x 2m, or a total of 16 m². The prototype sensitizes inhabitants to clean energy with a wind turbine, a photovoltaic panel and a water desalinizing system that distills and cleans dirty water by means of solar energy. Two of the modules are “green”. Their plants absorb carbon from the air and decontaminate the water. Biofiltration uses bacteria present in roots to purify the water." 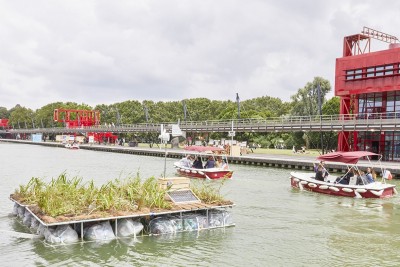 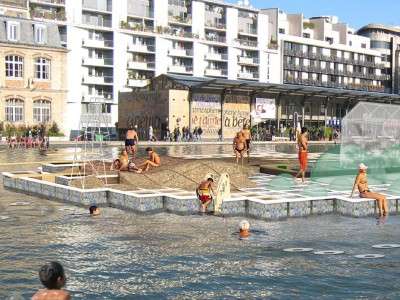 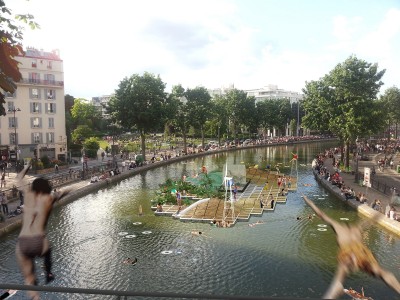