The climate emergency we are all facing has stimulated a renewed interest among both the scientific community and practitioners in environmental research, especially in earth-based construction techniques. Our project explores the potential synergy between this recent resurgence in the interest in soil as a material and the development of new technologies for the construction industry, especially 3-D printing. Current research projects into soil for Grand Paris and its potential construction applications can be extended by investigating the building potential of 3-D soil printing. Exploring this convergence is what has motivated the multidisciplinary team formed by the Transitions Department at the National Architecture School of Paris-Malaquais (ENSAPM) to develop this scientific and teaching research project.

Various research and industrial groups have recently developed printing systems for clay that confirm the architectural potential of this technique. Building upon this research, our project seeks to demonstrate the feasibility of 3-D printing soil for Grand Paris and to explore the potential applications of this innovative process in earth-based construction by pursuing two main objectives. First, the creation of a residence or wall composed of an ensemble of architectural elements at the smallest scale will validate this means of implementation and explore the potential for optimization provided by 3-D soil printing. The vast formal diversity offered by 3-D printing has huge potential for formal research, the reduction in the quantity of physical material used, and thermal optimization (e.g., thermal inertia, passive ventilation, and shelter from the sun).

In concomitance with this initial prototype, the research into the use of soil in Grand Paris will serve as a starting point to define a protocol for printing additive-free soil. We propose establishing a rheological set of specifications for the formulations to be used in the 3-D printing, a testing protocol to define the adequate formulation of a given kind of soil, and a protocol for carrying out the printing (particularly regarding the blending phase and the means of feeding the printer head). Even though extensive research into the formulation of soil for 3-D printing has already been conducted by a variety of actors in this domain, our proposed efforts at systematization have never been carried out. They represent a particularly relevant addition to the existing scientific research, as they will extend and facilitate the applications of 3-D soil printing.

Our proposed experiment forms part of a pedagogical effort that can be broken down into three stages. First, the research seminar in the master’s program in ENSAPM’s Transitions Department will define the set of specifications and the printing protocol, in partnership with the French Institute of Science and Technology for Transport, Development and Networks (IFSTTAR). This work will support the tests used to define an adequate starting formulation for the 3-D printing of a modeling clay, and then one for a specific soil for Grand Paris. Second, a workshop with students from ENSAPM and other institutions will serve as an opportunity for the initial exploration into the fabrication of architectural elements using 3-D soil printing, and of their thermal, formal, and efficiency potential. Third, the final prototype will be designed and fabricated as part of the senior thesis projects by students in ENSAPM’s Transitions Department.

Our project has three main goals: the development of a protocol to validate the printing potential of formulations of different kinds of soils, the application of this protocol to the soils in Grand Paris, and the fabrication of a home to examine the potential of large-scale 3-D printing for environmental architecture and design.

The professors leading the project (Nadja Gaudillière and Robert Le Roy) and the participating students (Imen Ghattassi, Salma Gouchi, Jing Liu, and Ola Nashed) are receiving support in this research from Jessica Boubetra, an artist and architect whose practice features a prominent use of ceramics.  The teams at IFSTTAR and the Navier Medical Laboratory (Emmanuel Keita and Romain Mesnil) are also providing support, especially in the domain of rheology and earth formulations, as is XtreeE for the large-scale 3-D printing. 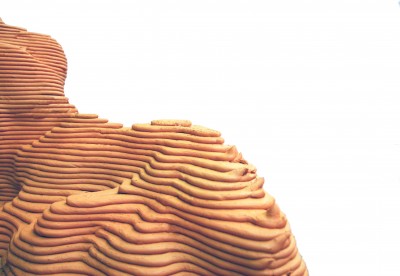