Contributory hall Majma Architect team (Martin Jaubert and Antoine Maitre) and MNAi (Maya Nemeta) intend to explore the potential of the entrance halls of Parisian buildings, to understand their function, how they’re shared and their possibility to evolve towards a more contributory economy. The intention of this " contributory Hall " project is to understand the spatial, financial and programmatic stakes of these common spaces and thus become one or several exemplary realizations.

Majma Architect team (Martin Jaubert and Antoine Maitre) and MNAi (Maya Nemeta) intend to explore the potential of the entrance halls of Parisian buildings, to understand their function, how they’re shared and their possibility to evolve towards a more contributory economy. The intention of this " contributory Hall " project is to understand the spatial, financial and programmatic stakes of these common spaces and thus become one or several exemplary realizations.

Behind the porte-cochère and Hausmannian hallways - the elaborate, marbled, open halls of the 60’s and 70’s - in today’s hall, often taken in vice between spatial quality and optimization of the surface - we can but notice the intrinsic qualities of these places, their development potentials towards new-fangled uses. Today, Halls in Greater Paris constitute the private extension of the ground floor building: hermetic spaces that sometimes have windows, are always secure, opaque for the greater part, old or modern, small or large, whose morphology admits to following few rules. Yet they contribute together to a daily culture in terms of sharing the, often unused, private space.

If Paris appears to be an activated metropolis, it has difficulty in representing itself as a dynamic one, apart from its ground floor commerce. A new type of culture is emerging from the economy towards a new type of contribution, a more active and participative territory, endowed with inhabitants who are more involved with their city. By contributing, the users or inhabitants seem tohelp taking over these well-established places. If inhabitants contribute to the Hall, the Halls contribute to Paris. Unity has a double-effect, inner-city Parisian life and its richness can help better expose its plurality and diversity.

Exploring the capacities and potential of Parisian entrance halls allows better understanding of the function of common spaces, their sharing and their possible evolution towards a more contributory economy.

It is question here of making a base to better appreciate and understand their development. Firstly, it will be necessary to understand the spatial, financial, programmatic cogs of the existing halls, to gradually sketch transformation projects (economic, spatial, social, temporary, etc.). It will then be necessary to set out these project processes through two exemplary realizations: one in an existing hall, the other in the plans for a new collective housing program.

EXISTING HALL
It will be question of implementing a project in the hall of an existing building. After phase 1, the technical, practical, legal and financial conditions must be studied to be able to implement the transformation of the chosen existing hall. The project must be exemplary for the city of Paris and must propose a new image for entrance halls in a Parisian context. It will be leader in terms of contributory innovation: associations, co-working, local services, companies, start-ups, reception facilities, caretaking etc… could eventually put these areas to use.

NEW HALL
In parallel, a study will integrate specific hall programs before the programming of new apartment blocks or office spaces. In close relation with lessors or investors, the proposals will be presented as "Hall projects". They can be adapted, before the competition, to specific plots of land and will interact in an intelligent way with the street. Before the architect starts work, these projects will embody a real wish for interaction with the ground floor of buildings.

Majma
Architecture agency established by Antoine Maitre and Martin Jaubert. Both graduates of the Graduate school of Architecture in Versailles, they collaborated at agencies recognized in France and abroad - the AUC, Sebastien Segers & Marc Newson, Youssef Melehi, DPA, ECDM - before launching their own structure. Majma has solid experience in designing and construction of housing, offices, student residences and hotels.

MNAI
Founded by Maya Nemeta and Amine Ibnolmobarak in 2015. The MNAi urban architects carries out potential, operational projects on various scales, within the domains of architecture and town planning. The quality of materials used, and solutions that are attentive to context and use are the objectives common to all the projects, taken on with a vision of the city as a place of culture, sharing and citizenship. 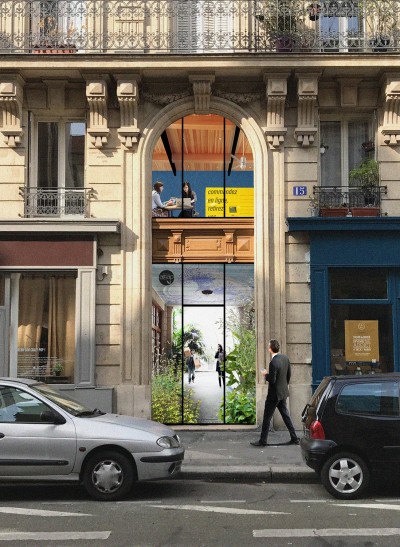