Podophone, a visual and acoustic playground

Podophone This team has proposed a fun way for inhabitants to reinvent the public space, reappropriating and subverting it by giving it a more human and musical tonality. The podophone is a dynamic urban game based on the visual translation of sound and its spatialization to reflect a neighborhood’s multicultural identity.

This team has proposed a fun way for inhabitants to reinvent the public space, reappropriating and subverting it by giving it a more human and musical tonality. The podophone is a dynamic urban game based on the visual translation of sound and its spatialization to reflect a neighborhood’s multicultural identity.

“We decided to place sound at the heart of our proposal. We use the acoustic landscape as a way to reinvent the public space. We propose playful means for inhabitants to subvert and reappropriate space and thereby give it a more human and musical tonality.

Podophone is a new kind of acoustic interactive device for the public space that anyone can use as they see fit, either just passing through on one’s daily route, or as a veritable playground where one participates in a collective sound and choreography performance.

The inspiration for this project came from Sandrine Nugue’s graphic design installation in the Piazza of the Centre Pompidou, which was successfully tested during the opening of the festival Laterna Magica 2018. “Cadence, walk or dance?” is a choreographic score that invites passers-by to follow a line drawn on the ground and to adapt the speed of their movement to the changing colors. On the basis of this first experiment, we want to enrich the project’s acoustic and interactive dimension by proposing a dynamic game based on the visual translation and spatialization of sound. We also want our initiative to reflect the neighborhood’s identity.  Therefore, the sounds used in the project will be created using the voices of the inhabitants of the neighborhood where the game will take place.
The installation is a playground consisting of twelve slabs connected by a pathway that contains different trajectories. Each slab is equipped with a pressure sensor and a speaker.

The speakers generate spatialized sounds that are translated visually along the ground and whose path the players are able to distinguish. Pressure on a slab triggers a sound that emanates from the slab and moves along the colored pathways. By following the sound, the player creates sequences and a progressive enrichment of the sounds emitted. When several players participate at the same time, they create an orchestra. The sounds form a harmony composed of different voices from the neighborhood (men and women, children, and elderly people). We have chosen Place des Fêtes as an example of a suitable site for this project.

Situated at the very center of a residential complex, this space is not a typical area for innovation, unlike city centers or tourist sites. The graphic layout of the Podophone will be visible from all stories of the buildings that surround this square, and thus it will merge into this landscape. The installation will be of interest both to local residents and passers-by, and its attractiveness will form part of the neighborhood’s multicultural identity.” 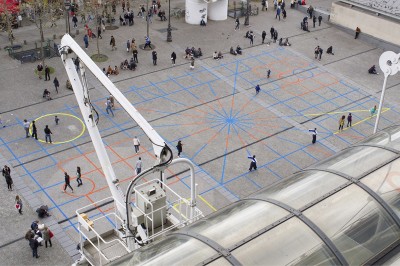 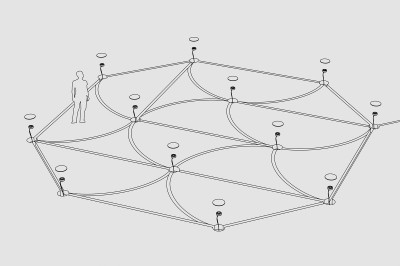